Some recent Blogs with quick links:-
Holly Ferns on Hutton Roof and how they are fairing
2019 a exceptional year for the berries
A very special Orchid - A branched Epipactis atrorubens
Redwing at roost (Birdy Brow-Kemple End) NEW UPDATES
Linnets - Extroadinary High numbers
2019 Visible Migration Bird Counts at Burton In Kendal 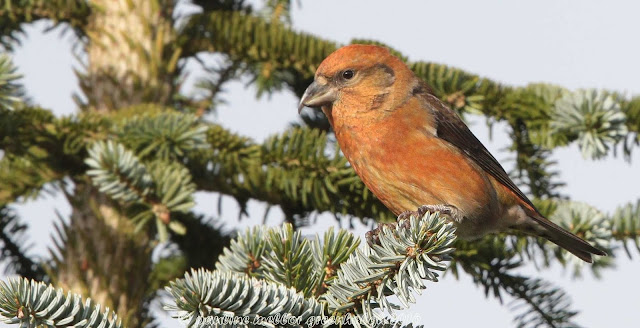 I was reading on the internet a few days ago about Crossbills with day old chicks in the nest somewhere in South Wales on the 30th December 2019, it immediately reminded me of my past experiences with these fantastic birds.  I knew they bred for most months of the year, though I always thought this excluded both December and January but apparently NOT!

Down in East Lancashire during the 80s I would love to watch the Crossbills which appeared to be a cheeky sort of bird that preferred medium to tall conifers. I can still laugh about them now, how they would let me brazenly walk to a position at the base of the tall conifer in which they were busy eating, whilst others were chipping away without a care in the world, and they treated my presence with a sort of tameness and they seemed to be in a totally “not interested in me” frame of mind….. But moments later, when you turned your back on them and started to walk away from them they would go berserk, in a frenzy with loud burst of chipping calls as though to show their disapproval at ones retreat. This behaviour was recorded on a couple of occasions.

I first discovered the Crossbills in Haslingden Grane, East Lancashire during 1986. My largest single party at that time was 24 birds which included both the lovely orange and the dirty lemony colours depicting the males (orange), females and immature birds.  Perhaps good years for the Crossbills and most of the local conifer forestry were being paid visits by these birds. With there being so many in a single flock at the time I presumed they could have been winter visiting parties. I saw many flocks, but most of them were numbering on average about four to six birds.  But over the days and months of regular observations and recording, I was to find that the birds were not just visitors, but some must have taken a shine to the area!

It was February 1986 or 87, and I remember seeing birds carrying nesting material in their bills, I remember thinking that’s early to be building nest! But on checking my references it is not early at all in fact it is quite usual. The conifer plantation they were using was quite off the beaten track and contained vast amounts of Scotch pine trees of a 40/50 year maturity. The bird would settle on the apex of the tree and whilst the feathers or nest lining in their bill would wave about in the breeze.

I was told by good authority at the time that these could well have been the most Southerly breeders on record, and although we now know they have more or less occupied all areas South at that time that was not the case.  The same year also produced other surprises and we were also fortunate to be able to record the first breeding Siskin in the same area.
To get some close observations, I had first to establish a place to which they frequented feeding and then look for the nearest point of slow running water, just little established water courses acting as self-made drains bringing the water down from the higher grounds.  On finding these areas would position myself close, but not too close and watch has the birds would come down every 15 minutes or so to have a drink. It is so necessary for them to drink on a regular basis to clear the toxins built up from the pine cones.

Whilst vismigging I would never have a problem distinguishing this species with the strong “echoing” chip chip chip (a plaintive full sound) and also collectively again there was no problem.  It’s just a question of becoming familiar with the differences between the Chups and the Chips…..

It is still a very special occasion when I do get to hear the "Chips" from overhead parties of Crossbill crossing over both Dalton Crags and Hutton Roof.