Fieldfare numbers of Wintering Birds have been almost non existent in this part of South Cumbria (Dalton Crags, Hutton Roof) 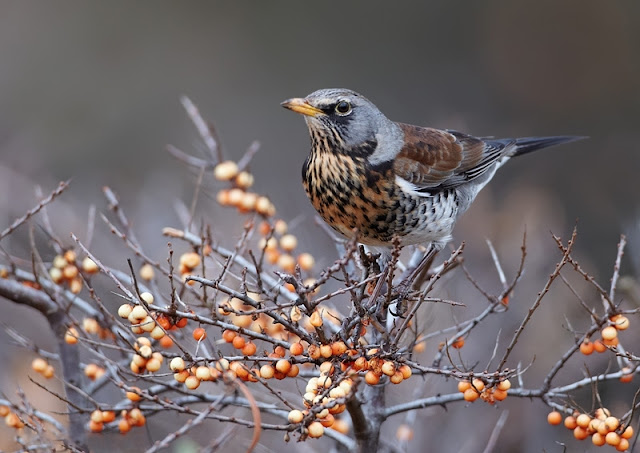 
Some other recent Blogs with quick links:-

Where have all the Fieldfare been this year in this part of South Cumbria ?

What a extroadinary time! with no Fieldfare in the Crags.... Its the first time I have experienced this in over 11 years of checking out Dalton Crags and the surrounding areas on a regular basis.  This year at best I have only witnessed a party of between five and ten birds in the Crags who stayed for about one week in February.  In all past years up to now I have had regular numbers of Fieldfare in the Crags, sometimes as many as 100 plus on most days throughout the winter months, but this year they have just been absent..WHY?

Has there been shortages of food to have caused this marked absence?

No there as not! in fact to the contrary this year of all years we have had bumper berry crops, especially with our hawthorn berries. Probably the best yield for many years!  so no the answer does not lie in food shortage! there must be some other reason, its has though they have made such a effort to get here, then ignored our food crops and moved on somewhere else....

Other local wintering visitors of the thrush populations, like the Redwing have been seen in reasonable numbers throughout the Winter, and regularly seen around the Curwen Wood and Holme Stinted Pastures.

Paid off yet again! doing my Vismig counts in late Autumn!

And this is were my Visible Migration Counts and records have come in handy, because without this information I could so easily have thought that the Fieldfare were down in numbers this year and had perhaps taken a severe blow, or may have been thinking, oh well they have ignored us this year in the UK and took a direct run down the South of Northern Europe, but this just was not the case as my records proved, because 2019 was one of my best years so far for passing through Fieldfare.  In fact last October/November over a period of 18 days I had the collossal amount of 27,079 Fieldfare pass overhead. It's always good here on passage if the birds can fly into light/medium North Westerlies. The best days counts were Oct 20th 2598, Oct 21st 5443, Oct 22 3200 then a little rest until Oct 28th with 1823, Oct 29th with 7897 and Oct 30th with 4104. So at least from these records we know that the birds did come into the Country.

So that being the case, what's happened, why have the birds not stopped with us?
Posted by Bryan Yorke at 10:11