I enjoyed this morning on Hutton Roof Crags (Cumbria Wildlife Reserve), I was actually collecting more evidence on the mystery plant which is without doubt just starting to go over now. Though I did manage to get a photo together with more close up photo of the leaf margins for examination and this will go a long way to identification. I guess its just like a "fingerprint" but I just want another day or two on this before a more clear picture starts to develop.

Todays inspection of some of the helleborines, showed they are just starting to look their best and odd individuals are already showing some traces of "purpurea" in the petals and sepals etc.  The usual story the closer to canopy the deeper the purple becomes.  I have one plant on the West side which is really turning fast now and would expect it to produce the darkest of wine colours if it goes like it did back in 2014 (see above photo).

I regular see ants farming black aphids on the Dark Red Helleborines (E. Atrorubens) but thankfully this year we have not had the aphids, can only put this down to the wet weather perhaps, but by the left when they come they soon devastate the plant and suck all the life from it!

Another bonny plant I found in canopy and almost hiding within a Juniper bush along with it's other compatriots was this one below and I managed to photograph from behind which is showing the petals and sepals already turning to nice "purpurea" colour.

And how do you work this one out?  Only one metre away from the above plant and yet within even thicker canopy we have the following very pale plant.


We have several "Helleborine" plants on Hutton Roof which only flower on one to two sides of the stem! does that remind you of something? Well just look at these photos, the first photo I took this morning.


And finally for today I could not resist this little beauty who clings within the side of her hazel bush and although surrounded by many lighter forms of helleborine, she still stands out a mile for her beautiful contrasting colours. 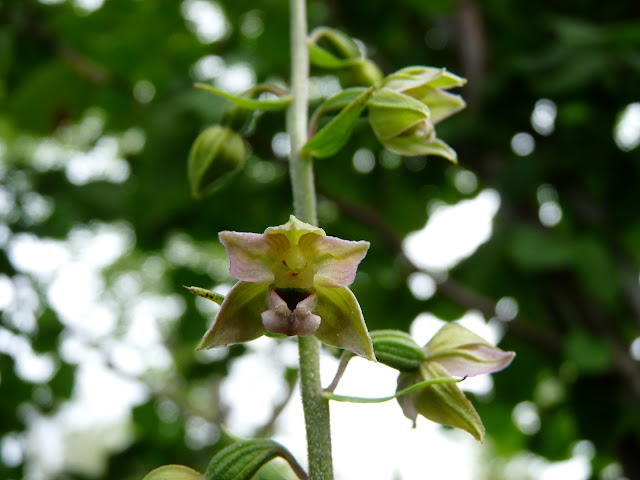 
Also last night (4th August 2016) it was our Burton Swift Bird Study Group meet for the last of the season and here is the report:

We met at Burton Memorial Hall at 2000hrs and it turned out to be a fantastic night with lots of Swifts flying. We just stayed on the Car Park from where we got the best overhall observations.

We thought at first it was going to be a very quiet night and it took a while to build the numbers to around the 8 mark, then within a further twenty minutes or so the numbers had swelled up to a minimum of 30 birds which to us all seemed happy chasing one another whilst feeding on the wing and screaming in unison.

We all had that feeling it could well be their big finale night and what a superb performance.

Tonights observers included: David Craig, Bryan Yorke, Hugh and Sue and Pete Miles together with our special visitors young naturalist Ella and Ben who really enjoyed watching the Burton Swifts and it made a nice change for them having been used to seeing Swifts down in Bath were they live.

We have not yet called a meeting for next week and decided we will monitor the situation on a day by day basis, so please check out the Swift site if you want daily reports.