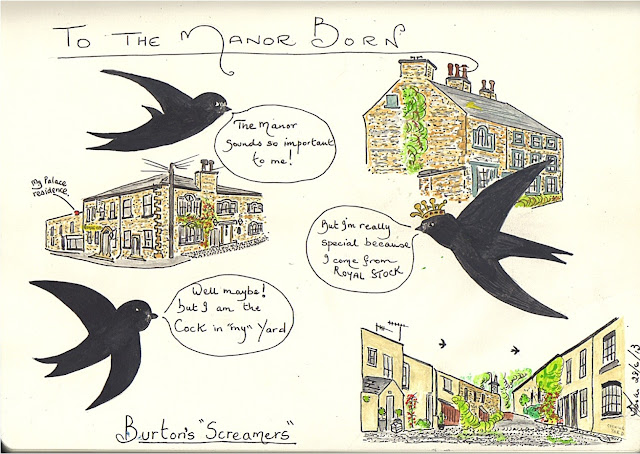 Last night was the first night this year of the Burton Swift study group activity, when four of us met up and gave a brief survey of the local Swift situation. Reg and I were present and it was great to welcome John and Paula who are new to the group. We saw about 12 birds flying semi high above the Burton Memorial Hall and Main Street.  At times up to six birds were seen chasing one another whilst at the same time screaming in their familiar vocabulary!

We made a brief stop at the rear of the old Royal Hotel, when almost straight away one bird almost brushed past us and eventually went into its old established breeding nest site.  Moments later another bird came in but this time using another of the old nest site holes.  So here we have already established there could well be two pairs at work. We noticed that Ivy had grown to such an extent that it is just bordering on the entrances to the nest sites. Obviously we will have to monitor the situation in regards to the ivy. We also had a couple of Swallows hawking high above the Royal. We were of the opinion that it was too cold to see much activity from the Pipistrelle's....

We moved on and started to observe the Manor House and we also managed to see a bird fly into the old established site near the corner of the gable end.  This was good to see because we where not sure how things would turn out this year on account of there being scaffold there last year.  So its looking good so far!

A lovely surprise to us all was when a bird was seen to go into a NEW site on The Coach House, and also another bird was seen also trying to access this same site.  We did see birds canvassing this site last year, possibly none breeders last year and preparing their mind in readiness for this year and a absolute delight to see this new activity!

Its still early days yet, but we have already decided that we will be meeting up again next Thursday 12th June at the Burton Memorial Hall at 2100hrs and anyone who wishes to join us would be very welcome.


Also I have received the following email from David Pitman re Fly orchids on Hutton Roof complex. (6th June 2015)

Hi Bryan,
I saw a couple of Fly Orchids on .............. a few years ago, and this year
I decided to return and see if I could find any.  I went up there on Friday the 5th June
and in between sheltering from the rain storms I carefully searched around.
I found a total of 6 Fly Orchids, four in one area and two in another about 100 yards away.
The latter two were healthy looking plants with buds, flowers already out, and spent flowers visible.
They were growing in amongst short grass.
The other four were growing in a much rougher area, on limestone fragments (pebble sized)
which had become compressed into the soil, with very little grass around.
These orchids did not seem as advanced as the other group, looking like they had only just
come into flower - except for one which was still in bud, very small (2 ins) and very difficult to see.
You or others, may already have seen orchids on .............. this year, and somebody has probably
got a file on the subject.   In which case my sightings may be of interest.
Regards,
David Pitman.

Thanks David, and I will gladly pass on your records to the Cumbria Wildlife Trust and also Cumbria Biodiversity at Tullie House Museum in Carlisle. I dont suppose you took down a gps?