On Sunday my friend Alec Greening bestowed the great honour for me to lead two separate parties (one am and one pm) of fern experts who had assembled from all points of the globe to celebrate 125 years of The British Pteridological Society and part of their 7 day agenda was to come to Hutton Roof and check out in particular its rare Rigid Buckler Ferns (Dryoperis submontana), its two rare Holly Ferns (Polystichum lonchitis), plus lots of other fern specials dotted along the route.

Other ferns of particular interest were a small colony of nine individual groups of the lovely Green Spleenwort (Asplenium viride), and also some of the fine Brittle Bladder Ferns (Cystopteris fragilis) which were set within beautiful limestone settings and many photographs were taken.


Getting away from ferns we had other additional species whilst on route which included a nice slightly "lemon petalled" variety of the Dark Red Helliborine (Epipactis atrorubens), quite a few of its cousin the Broad Leaved Helliborines (Epipactis helliborine).  Also some (well gone over) but nice remnants of the other Hutton Roof speciality the Angular Solomon's Seal (Polygonatum odoratum).

Dull overcast weather for most of the time during the walks but occasional sunny outburst which made it possible for us to get odd glimpses of the Dark Green Fritillary Butterfly, Meadow Browns and Ringlets Butterflies. 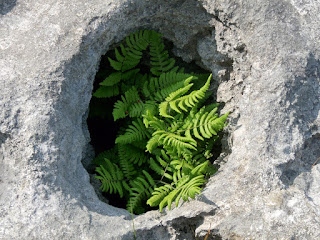