I thought with it being the best show of Angular Solomon's Seal for some ten years I just had to bring forward my diary to accomodate yet another survey of the plants which numbers 8 separate populations which we have and that's just on Clawthorpe Fell which is managed by English Nature. Although I have previously done all the mapping out and gps recording.  Its always good to check them over again and again.  At least now we do have a complete assessment of this species in relation to this site.

The site although having 8 populations of ASS, each populations are very small and probably at best are only between one metre to two metre (linear), and some of them are only say 24" long (linear). But the beauty is that they are all protected and are down in the grykes like this one in the photo. Besides retaking the gps and making notes I also took photos of the better more fruitful populations.

The area is outstanding for the rare Birds Foot Sedge which I surveyed a few years ago and was then able to record 820 clumps of the Sedge.  Today its everywhere and would not be surprised if that number had increased to well over 1,000 or more.  I am not sure if the plant is still listed in the Red Data Book and I am told it is mega rare outside of this area, but locally I can see it is doing fine, not just here but on Lancelot Clark Storth and also small pockets on Burton Fell and again on the Common itself.  Here is a nice photo I took today which clearly shows some of the magnificient sedge flowers.

Just as I approached the Clawthorpe Fell pavements I decided to check out some Hypericum hirsutums  (Hairy St. John's Wort) which are just there as you enter the pavement, and sure enough I was not to be disappointed with the plants already at about 10" so here is a photo of the young plant and also a close up photo showing the opposite leaves and "heavy" hairy appearance which gives it it's name: 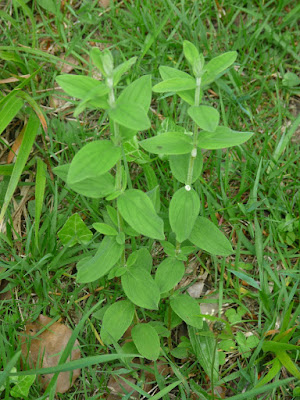 The place has lots of different grasses and sedges of which they all look amazing and I would love to know the names of them all.  One I do know and which to me always looks interesting is the "Flea Sedge" of which there is a small population of some one metre. Here is a photo of the sedge.

This fell has always had a good population of English Stonecrop together with occasional Biting Stonecrop.  But today I noticed the radius has spread almost double and would bet it is covering a area of at least 50ft diameter.  Here is a photo showing part of it:

I always give wonder to the Great Mullion - it grows so tall and is a beautiful plant especially when in flower, but it will be some time yet, but just look at the tick rosette already forming and those bigger than life velvety light green leaves.  Several sprout up here and there on this pavement!


So to finish off with on this blog I want to show you some Maidenhair Spleenwort, you might say well there's nothing special about that its everywhere!  Yes could not agree more, but to see a sight like this almost had me singing "Auld Lang Syne" and out with the old and in with the new and all that!