On way up to Mossy Stones it was great to hear birds again and plenty of them singing away. The Garden Warbler (already recorded) was quietly bubbling away, but further along the footpath it was great to hear a new to me for the area a Whitethroat really going for it!  so this was booked down in the records, also further along the root were regular Willow Warblers and Blackcaps.

Checking out Mossy Stones although I should know it like the back of my hand by now, but it really is surprising everytime you visit you have every chance of turning up with something new.

A young Common Polypody with unusual colouring showing both light and dark throughout.

This seemed strange because the fern was well down a gryke (maybe 3ft) yet had obviously been attacked severely by some unknown creature.  At first I thought I had found something really special!!


On my way up I also found these little beauties hiding under the canopy and could easily have been missed! What appealed to me was how long and narrow the frond was but what a carry on to actually get to the plant itself, a proper obstacle course" 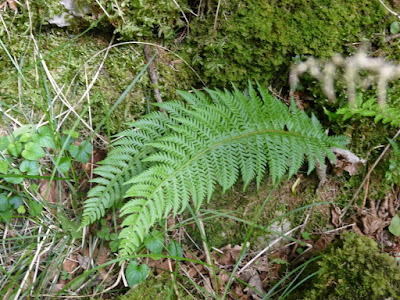 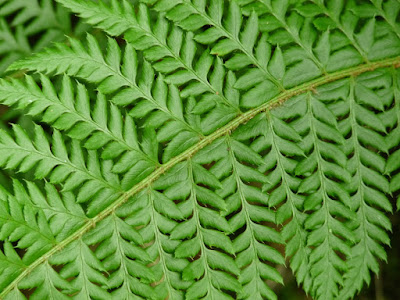 My first of the year "Self Heal" which are not far away from where I get the special "White coloured Self Heal" but these are not even showing yet.

The birds today again have gone mega quiet with just occasional Robins or Willow Warblers.  The butterflies were showing with plenty of Small Heaths and just the odd Small Pearl Bordered Fritillary.

The first orchid to check out today was No.66 which is a beautiful Lemon Petalled Specimen and this is the photo of the plant as of today:

You can already see the overhall green involved with this plant.  Here is a photo showing the beautiful flowers this plant produced last year.

On checking some of the main Epipactis yesterday they are doing really well this year with the initial checks although one or two are now starting to become victims of the Hare which we would expect anyway, just keep fingers crossed they take the ones which are not included in the studies.

The following shows you a example of the "Harecut" in this case to one of our E.Helleborines.  You can usually get a idea who the culprit is by the angle of the cut like you can see here.  With the Roe Deer they usually make their cut straight across (or at the slightest of angles)

Although you do expect many casualties over the season, occasionally it is noticed that the Hare gives the plant the snip and leaves the flower head dangling without even eating it.  That just is annoying!  I have noticed that the quicker the heads produce colourful flowers the safer the plant becomes.  It must be the colour in some instances that puts them off.

It was nice today to find another Carex Ornithopoda (Birds Foot Sedge) on this fell which now indicates populations of at least two here and in total we now have this rare species showing up at five different areas of Hutton Roof which brings the number of individual plants at somewhere around the 1600 mark.

Now checking one of the main "colonies".  A area which is full of Schmals with plenty of offsprings around and plenty of maybe's and breed backs etc etc etc.  To start I will now show Specimen 9a which generally comes through a very pale plant and it looks very much like this year will be the same.  Although it cannot be confirmed for sure all the evidence so far "especially the light colourings" point to the fact that it is possibly a offspring from Schmal 9.  So here is the photo today and also followed by a photo of last years little beauty.

And here below is a photo of the same plant from last year (2016).  I feel as though the 9a, 9b etc are from the original specimen 9.  This is based purely on geographical location and unique colourings only.  Samples from last year (2016) (under permit) have been collected and are waiting DNA analysis which will hopefully confirm this either way.

Here is another photo of Specimen 9a from 17th July 2015 and following on with yet another photo of the same specimen against a "straight" atrorubens nearby, which does then show you the colour contrast.  These photos are so good in that they show quite good comparison on the previous years and eventually when I get time I will show you photos heading from the original 9 and its possible family members!!

This photo above shows the plant in situ with a "straight" atrorubens coming up at the side of it.  This plant never showed in 2016 and so far this year there is no evidence showing for this year, although the 9a is doing well as previously shown.

Several more plants were also checked out and so far it looks a good year!