No Broomrape, But Wet Bee Orchids 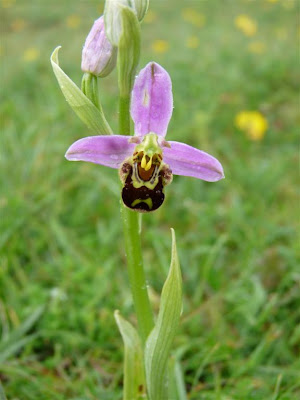 I crossed that green or soccer pitch where children happily meet,
Wettened by those regular showers, which must have raised the worms,
For I did count no less than ten mixed thrushes of all size, each
Tucking in to their spoils, that rain, made welcome to these birds,
Blackbirds of Black and Brown, Song Thrush and Mistle Thrush
Partying without a cross word! No bullying, just scoffing!! So rare.

For Broomrape was the plant I hunt this very day,
I searched and searched the spot I knew, that same spot!,
Where It faired last year, although I was late to see it born,
So splendour gone but saw it dead or spent and coloured rust,
But this year I could not find it anywhere close or thereabout,
amongst the many mixed clover or vetch well spread here.

Serenaded by the Finch, so green was its colour,
On and on it made that regular repeated drawn out nasal call,
“seeeeeair” “seeeeeair” as if it was doing its best to swear!
Willow Warblers “Wit” and Blackcaps rushed their garbling sentences,
Song Thrushes mimicking, Young Tits squabbling everywhere,
Trying to jump the queue for food, shouting to their mums,
And the loudest gets the grub! (“It’s a green caterpillar”)

This is a haven of flora at its best, and today I recognize so many,
Trefoils, Birds-Foot, Lesser and Hop, attracting Heaths and Blues alike,
Ox-Eyed Daisies everywhere, stood together in groups, swaying in the wind,
Looking down with eyes so full of subordinate grin to the lower rank..
Restharrows, Self Heal, Centaury just starting to come through, and
Whats this? Its new to me at this Old Quarry Site, its Blue Fleabane.

Let me check the orchid site! Which orchid do you mean, ah! For now,
The Bee Orchid, well I did have one spike last year, Has it survived?
Let me check, if this is it, Oh yes! It’s survived alright, today,
I counted no less than sixteen separate spikes in that area,
And that’s to the North Side on the sloping short grassed gravely bank.
Its catered well for these fair Orchids, but more to the South I later found.

Common Spotted everywhere but most in stunted spikes, just
Now and again a nice plume, and one white variant surprise.
The Pyramidal wont yet be showing, but the Marsh Helliborine will!
My favourite of all the smiling faces, so majestic with her frill.
Well on her way for flowering in the next three weeks. Ah!
Must check on the ones in the pit, or the old quarry up there,
the ones that take on the ash from the long gone camp fires,
suprising just how much of a redder version they take on! Stunning!.

On that top where old concrete quarry foundations are still on view,
Surrounded and hemmed in by crowded huddled together,
Rosebay Willowherb, still in green and taking over if given the chance.
A Pied Wagtail calls and gives its catwalk parade on the old concrete.
It was mentioned to me that Bladder Campion is up here, can’t find it today,
But yet I know its on the lower deck, or it was last year.

Across the mighty Crag looks down.
Posted by Bryan Yorke at 16:43