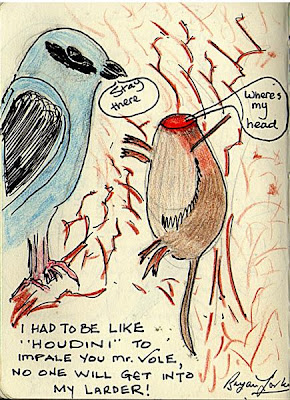 0900hrs - 1130hrs. Today again the Shrike was showing up well in the Dalton deforested area (rotting woodpiles). It spent most of its time on its "favourite" tree.

I checked out the impaled prey in the small tree below the Trig point and it was still there, so took several photos which are now included within yesterdays blog (below - click on home and scroll down). The prey we have now decided was a Common Bank Vole.

Migration: Meadow Pipits where at about 60 per hour going North. Also had some Chaffinch, Siskin (2 pairs), Skylark 5N (2 parties).

Trig via Slape Lane, Burton Fell & Lancelot Clark Storth and Return:
Strobe lighting effect all the way along Slape was not pleasant
Low Sun caught every opening of the tall hedgerow,
Three Blackbirds squabbling and fighting whilst chasing
one another in a large circle, wonder which won!
Tits calling everywhere, Great, Blue and Coal, but no Marsh!,
Fresh Roe Deer tracks deep in the muddy path..
Bullfinch pee'uud and then also trilled, I have never
heard them trill like that before,
like Waxwing's Trill.
Overhead, Redpoll, Sparrowhawk, and Pigeons and Crows.
Stepping over the pavements with grikes and clints,
Its like prehistoric giants footprints, massive, and yes!
I can see the Coral lookalike staring back at me.
Its grey or silver grey or lighter than battleship grey,
Theres still some of last years ferns deep down and lost water..
Waited for Dave to take his first photos of the shrike,
Spent time watching Meadow Pipits and Larks move North.
Took photos of the Bank Vole impaled, how did that
Shrike ever get that Vole to that position I will never ever know,
It certainly was without doubt the houdini act of 2011, and,
no one, nowhere will raid his "larder"...
Heading back, past BAP seat,
Wal with his working parties, cleaning up the pavement,
Woodpecker drumming near Pickles Wood, and
race back as fast as the legs would carry because I was late!
Co blimey!!
Posted by Bryan Yorke at 17:00