Swallows at Hutton Roof and other Migration

The day started well with a fresh "Chiffchaff" calling from "Thornleigh", Burton.
Then from 0900hrs until about 1145hrs went up to the Trig Point on Hutton Roof checking out migration. I had the following: (all North/North West unless stated) Swallows: 4 (a pair which went straight through, and two singles at different times. One of the Swallows was watched over 20 minutes whilst it hunted on the Common.
Also had: Meadow Pipits, 156 (over two and a half hours) best parties 3 at 9 and 1 at 7
Skylark: 1
Redpoll: 2S
Greenfinch: 1
Chaffinch: 2
Linnet: 1
Curlew: 1 E
Also Bumblebee x 2, Great Spotted Woodpecker drumming at bottom of Crags, also had two Yafflers, one at Bottom just after leaving Plain Quarry car park and the other at the start of the deforested area after leaving the Crags. Somebody also reported Hawfinch close to the Car Park (Plain Quarry)
The Great Grey Shrike was showing well from 0900hrs to my last sighting at 1045hrs. Again seen on its "favourite tree" on Dalton Side, early on, but since 0930 and up to 1045hrs,it was seen by looking NNE from the Trig on the high point of a 12ft hawthorn in line with the main footpath and on the horizon (about 200/250 yards NNE from Trig). 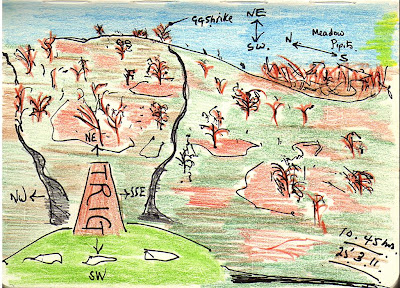 Checked out its "larder tree" (see photo) and there was either the same bank vole but with only its backside/tail left (see photo below), and if so it had been moved to a totally different area and spike or its yet another Bank Vole. 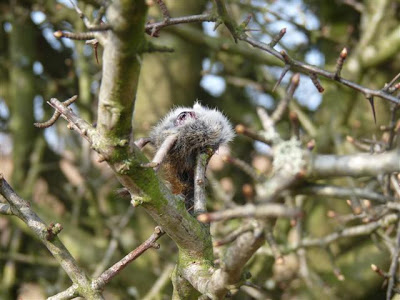