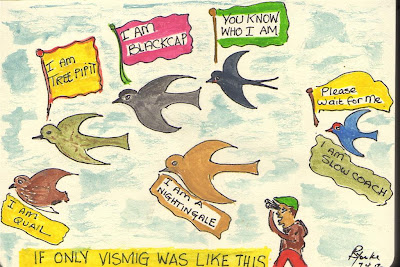 0615hrs-0730hrs. Patchy and subdued dawn chorus. Lots of group calls from sentinel Collard Doves singing in harmony whilst each sat on the chimney stacks of houses in Burton Close.

Mo has returned overnight and is now singing away from Hordley House gardens. Still no Henry or Victor! all the others back in and on their territories.

0830-1100hours - from Plain Quarry to Trig and back through Lancelot, Storth and return to Dalton. Straight away after leaving car park Chiffchaff Craig was calling from straight in front on the Crags (his normal territory). And then just going through opening into clearing before starting to climb the Crags, I head two more Chiffchaffs singing (new ones I think) or unless one is Craggy, because I have not had him for a few days now. But singing to the far right hand side and also yet another one further down to the LH side on pathway towards Nineteen Trees. Also here just before climbing the Crags a new overnight Blackcap has arrived and singing. Still no Willow Warblers anywhere other than the ones I had yesterday on Burton. Lots of Redpoll present and some moving overhead North. Just two Meadow Pipits North in over one hour. A new Chiffchaff has now arrived near to cowpens in Lancelot, almost same place has last year (545772) also besides "Storm" two more Chiffchaffs have now arrived in Storth Wood, making the full compliment to last year. Right next to a singing Chiffchaff was a singing Coal Tit mimicking the Chiff Chaff sound, and then its friends (other Coal Tits) started to do it also. Never heard that one before, but they were very good and from a distance you could be "mistaken into thinking" - almost!! Also Goldcrest calling from within Storth. Chiffchaff Summer calling from usual spot.

The reason I've put this on is that I have just found out about a "plane" site called "skyspy" and after you have downloaded a app, you point your mobile phone towards the plane in the sky and it then tells you on the screen what sort of plane it is and where its from and where its going etc!

I'll stick with what I know, thank you.
Posted by Bryan Yorke at 07:59