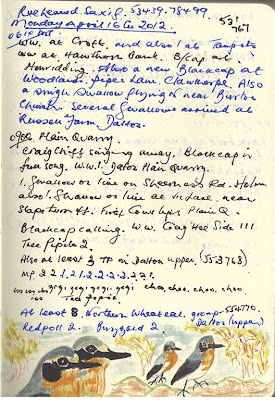 0800hrs (yesterday - Sun Apr 15th 2012) A Swallow now back on territory at Green Dragon Farm, Burton In Kendal.
1300hrs: Single Swallow over Carnforth Train Station heading North.
1600-1800hrs (yesterday - Sun Apr 15th 2012)
Had a walk around Clawthorpe etc. A unrecorded "Chiffchaff" singing out of Sexton Haigg, also two Chiffs singing from Holme Quarry Nature Reserve, as also recorded last year. And also on the nature reserve was a Blackcap singing. 2 Willow Warblers calling from fields across from Clawthorpe Hamlet, also one as you start to go on to Clawthorpe Fell.

(Back to today - Monday April 16th 2012)
0545-0715hrs. A more subdued early "dawn chorus". Two new Willow Warblers near to the Tanpits at Burton. also one at Hawthorn Bank (Vicarage Lane). Also new Blackcaps singing away at Henridding and also at Pipers Lane (Clawthorpe). A single Swallow flew North over Burton Church at around 0710hrs. Also informed that several breeding Swallows returned to Russell Farm, Dalton over the weekend. Shortly going up Dalton and Hutton Roof, checking out for new arrivals etc. will report back soon.

0900hrs-1200hrs.
A lovely suprise was to see a group of eight confirmed, but could have been more, "Northern Wheatear" which were half way up on the Dalton (upper/deforested). I was watching them for ages, absolutely beautiful plumages, more erect in stance as usual, and perhaps a little larger.

I remember in the 80s, it was always my cue to go and check out the Dotterel sites, because whenever I had parties of "Northern Wheatears", there where on most occasions, accompanied by Trips of Dotterel on passage, this was the case on the Haslingden/Oswaldtwistle Moors, dont know whether or not it happened on Pendle. I dont know whether the situation is the same up here in North Lancs/Cumbria, but can't see why not!!

Also another two singing Tree Pipits have now arrived, this time at the usual place in the Dalton (upper/deforested).
I have also done counts of Willow Warbler arrivals, but from up close to the Trig and also close in to the boundary wall on the East Side. Just in this little area I had 14 singing birds, within 2/300 yards of the Trig. And a further 29 singing birds along the East side boundary wall areas. Thats already totals 43 birds with only a small proportion of the Common as yet counted.