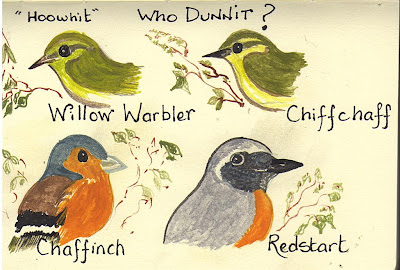 0830hrs-1100hrs. Checked all round at the Plain Quarry areas, but still no Willow Warblers, still just the one Blackcap, and no Tree Pipits yet. And the position remains exactly the same in both Burton and Lancelot locations, with the exception of the already definate 4, but probably 5/6 Willow Warblers at upper Burton Fell,which arrived on Good Friday (just out of interest, this site also produced the very first WW's last year in almost the exact spot), plus "Black" the Blackcap, already recorded since Good Friday, "Black" which was again singing well this morning from out of Pickles Wood in Lancelot his long established territory.

By this time last year I'd already had over 30 calling Willow Warblers just from Dalton areas up towards the Trig. Also by now my first Tree Pipit had already arrived. And for me I'm still struggling to get a Swallow, whereby I'd had four already by March 25th. Its as though this year there is a definite "block" somewhere delaying some of the arrivals.

Whilst climbing Dalton (upper) this morning, Sky (the Skylark from over the wall on the Crag House side, whom always comes up everyday as you enter Dalton upper. Well today I had to stop in my tracks to listen to her as she included in her repertoire quick snatches of both "Tree Pipit's" descending crescendo and also part calls of "Alba Wagtail" amongst a multitude of other stuff).

Chiffchaffs now settling down throughout within their usual recognized territories.