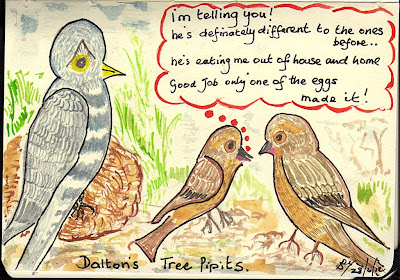 Its been raining most of the morning, so its given me time to catch up a little and also do this sketch of one of Dalton's tree pipits discussing with another on why it's chick could be so different from how it's chicks had been in previous years. This year the chick is so big, and has a enormously big appetite!

"The Cuckoo lays the egg, and leaves the territory to return to Africa by June. The young Cuckoo does not usually leave until late July or even August. Yet somehow, single handed without any guidance, manages to find its way to Africa".

"Cuckoo has been and gone away….. again,
So soon, they came on 27th of April and gone by 10th June,
They are probably near to Africa now or thereabouts.

Each day he was seen in Dalton’s deforested,
Right at the top, sometimes on the left, and
Sometimes on the right, in the Cuckoo Tree.
He’d sit on top of that tree and called “Cuckoo”.
He’d also try a different tree from where he would spy,
Whilst mobile he would Cuck-oo, cuckoo with plaintive echo.

Two were seen together once, in the same old tree,
He’s the one who watches the Pipits from on high,
And spreads the message, to his good lady,
Off she then goes and moves the host,
Or maybe hits lucky and catches her away.
And then, lays her egg with such disguise.

By the way if you want to check out my photos of Hutton Roof's natural limestone sculptures. Please Click here, and when loaded, click to select and if enlargement required take pointer to top of photo and click on zoom.
Posted by Bryan Yorke at 10:48